giving you a unique way to travel Florida! 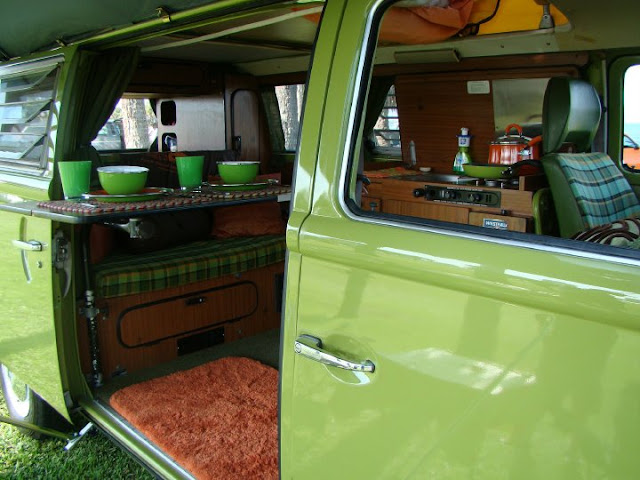 What is the first thing you think of when hearing 'Sink Hole'?

Lush & tropical probably is not the first thing that comes to mind.
Or to walk down a countless steps to get to
the bottom. Well, I suggest you plan a trip to Devil Millhopper. It is unique to say the least.
This is a great park close by I-75 in Gainesville. 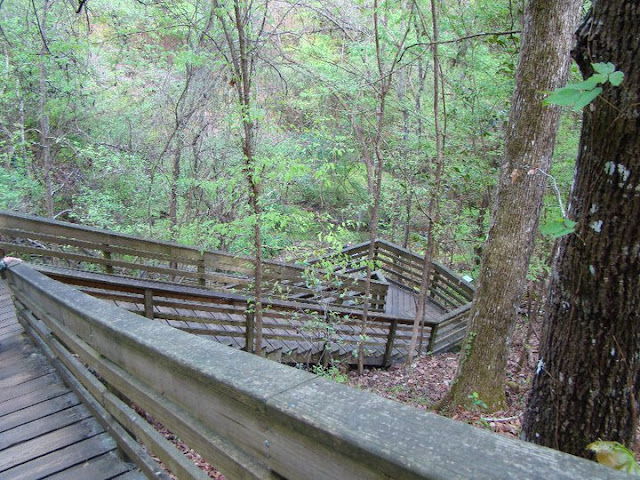 In 2010 Florida State Parks magazine featured park for the front page was Devil’s Millhopper.
I could not believe this picture was taken anywhere in Florida! It looks to be taken in the Appaliation Mountains, which was just the fix I needed. Being a ‘Georgia Girl’ I truly miss the mountains.

While traveling home from a trip over to Ft Clinch we deiced to stop here on the way home.  It was much smaller than I imaged. For such a deep hole, the crater is only 500' wide. There is a half mile trail that circles the top of the sinkhole.  With a nice look over next to the stairs taking you down.  It was busy that day with college students walking the stairs for exercise, and what great exercise it was!  Like I said the trail is half mile and the sink hole goes down 120’… that is steep.  They have built gorgeous stairs and walkways leading down into the bottom.  What I would not do to have this spot all to myself on a slow day. 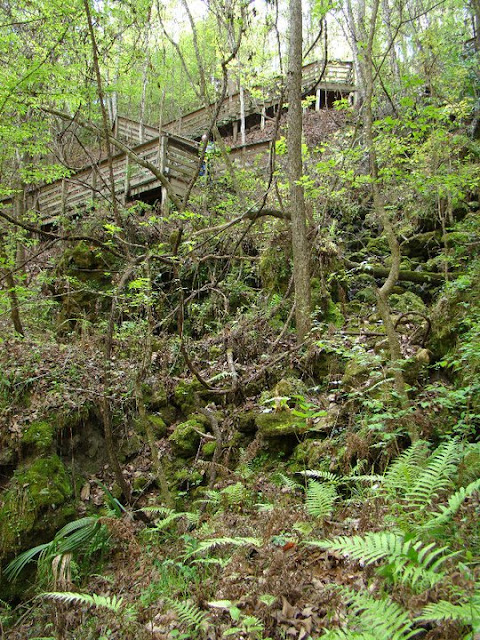 In the midst of North Florida’s sandy terrain and pine forest, a bowl-shaped cavity 120 feet deep leads down to a miniature rain forest.  Small streams trickle down the steep slops of the limestone sinkhole disappearing through crevices in the ground, and lush vegetation thrives in the shade of
the walls even in dry summer weather.  A significant geological formation.  Devil’s Millhopper is a National Natural Landmark that has been visited by the curious since the early 1880’s Researchers have learned a great deal about Florida’s natural history by studying fossil shark teeth , marine shell and the fossilized remains of extinct land animals found in the sink.  Visitors can enjoy picnicking and learn more about this sinkhole through interpretive displays.  The park is open from 9am – 5pm Wednesday through Sunday.  Located three miles northwest of Gainesville on N.W. 53rd Avienue (state road 232). 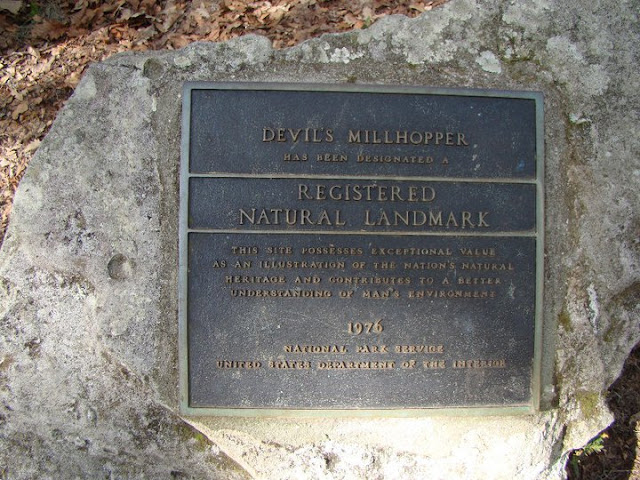 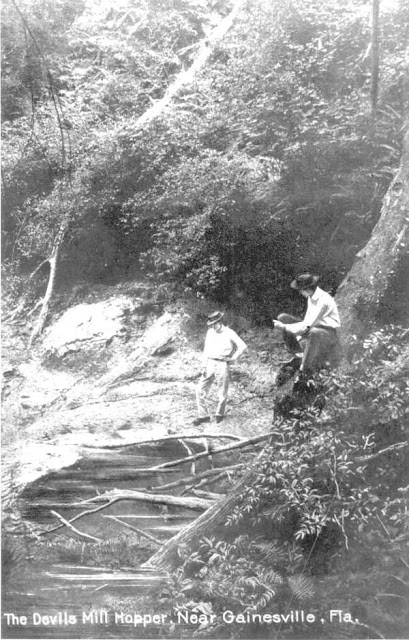 
The site was purchased by the state in 1974, and a set of 236 wooden steps, along with boardwalks and an observation deck at the bottom were completed in 1976.

The 120 foot (40 m) deep, 500 foot (150 m) wide sinkhole got its name from its similar appearance to the hopper of a mill, along with the bones found at the bottom, suggesting animals entered it on the way to meeting the devil.

How a Sink is Formed

Limestone is the foundation on which the surface of Florida rests. Although this stone is very hard, it is easily dissolved by a weak acid. As rain water soaks into the ground passing through dead plant material on the surface, it becomes a weak acid. When this water reaches the limestone layer, small cavities are formed as the rock is slowly dissolved away. Water moving horizontally through cracks in the limestone also causes cavities to develop. This process continues over a very long time until a large cavern is formed. Eventually, the ceiling of the cavern becomes so thin that it cannot support the weight of the earth above it. When the ceiling collapses, a sink is formed.

These depressions in the limestone have a very moist climate. They usually support a unique mixture of tropical and temperate plants because of the lack of temperature extemes within the sink itself. Amphibians such as the salamanders, and invertebrates such as crayfish find refuge within the confines of the steep slopes, which often flow with seepage from surrounding areas. Vegetation around the upper rim of sinkholes is usually characterized by well developed stands of hardwood trees. Steeper rock walls are covered with mosses, liverworts and ferns.

Posted by floridavwrentals at 9:19 PM